After yet another highly successful #Writestorm session this evening with a few fellow #awethors I managed to put together 1483 words of my latest novel in the Light and Shadow Chronicles series (title yet to be revealed!) in just one hour. (God, I love the Writestorm methodology! For more check out this link: writestorm – a concept that changed my entire philosophy about writing)

After each session, we share a short extract from the session. As I do at least one session a week, I plan to share extracts from my work on this blog to give my readers sneak peeks at the content of my next book. So, here is a tiny excerpt from today:

Drake grinned. “Do you know how long I’ve been waiting to get these grooves carved into my axes? They’ll make my swing faster and more accurate—aerodynamic, you know? I’ll fly through the air.”

Silas slapped his brother affectionately on the back. “Maybe you’ll save my ass a bit quicker next time we meet a Barlakess then.”

Drake threw a frown in Silas’s direction, ignoring the chuckling coming from Requiem. “You’re lucky I saved you at all. It would have been much easier to attack the Barlakess while it was busy chewing on your head.”

“Keep it down, weirdo,” Requiem muttered as they strolled into the darker regions of Belkeep’s underworld. “The gangs will hear and come looking for trouble.”

“Rubbish,” Silas said, but he lowered the volume of his voice as they began to wind through the tiny alleys of the slums, past hastily built shacks and gangs of street kids looking at them with hostile, narrowed eyes. They were about to enter the underbelly of Belkeep.

A Barlakess, by the way, is a vicious creature loosely inspired by both the Behemoth of the Final Fantasy games and the Nexu from Star Wars Episode 2: Attack of the Clones 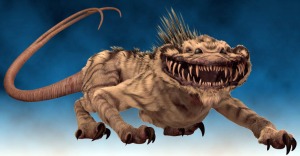 One thought on “Another #Writestorm session!”