This month, thriller author James Quinn has re-released his edge-of-your-seat political thriller ‘A Game For Assassins’. This stylish new cover casts the perfect image for such a gripping, dramatic storyline. 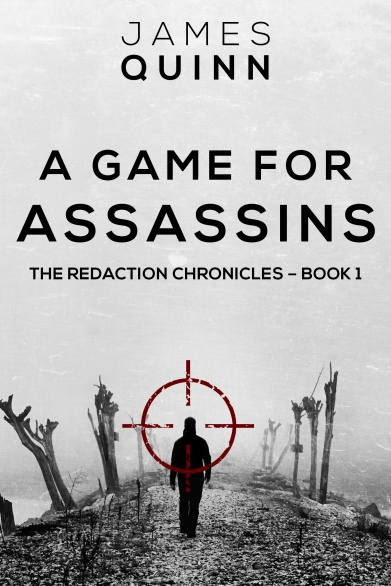 I spoke with James Quinn about his book:

In association with my publishers – Creativia Publishing – we have decided to spruce up the cover of AGFA.  It was felt that since the interior of the book had been brought up to a high standard in terms of story, proofing and editing, we should also afford the same courtesy to the cover.

What we have now is a stylish, theme orientated cover that oozes “Cold War” espionage and action and which grabs the reader’s attention.

I hope you all approve.

Please feel free to share and thanks for all your help

The assassination of a Caribbean dictator….

The “hit” on a traitor in Beirut……

The brutal murder of a young CIA officer behind the Iron Curtain…..

It is 1964, the height of the Cold War, and British Intelligence is riding high with its top double agent network: Constellation.

But in the secret war fought across Europe the enemy is never far away and soon the agents of Constellation are targeted by an unknown team of assassins.  In desperation British Intelligence sends in their best agent to protect the network and hunt down the killers.

But “Gorilla” is one of the best “Redactors” in the business.  He’s an expert at close quarter combat: quick to the draw and deadly accurate when it comes to the elimination of traitors and extremists on behalf of the British Secret Service (SIS).  He is soon drawn into a game of cross and double cross where nothing is as it seems and even the most perfect spy can die in a wilderness of mirrors.

“A Game for Assassins” is an action packed edge of your seat thrill ride played out across the global stage of the Cold War.

James Quinn spent 15 years in the secret world of covert operations, undercover investigations and international security before turning his hand to writing.

He is trained in hand to hand combat and in the use of a variety of weaponry including small edged weapons, Japanese Swords and Hunting Bows.  He is also a crack pistol shot for CQB (Close Quarter Battle) and many of his experiences he has incorporated into his works of fiction.

He lives in the United Kingdom and travels extensively around the globe.

For more information check out the James Quinn Website: