The cover for my newest novel A Chronicle of Chaos features a shield with eight symbols carved upon it. Each of the symbols represents a different army, faction or group of people within the series. Over the next eight days, to complement the release countdown, I will be posting about each of the symbols to give some background on the armies you can expect to learn about in Chaos and the upcoming novels in the series.

The SEVENTH symbol I will be talking about can be seen on the left of the shield:

This is the sigil of D.U.S.K – the Democratic Union of Separatist Knights.

D.U.S.K. is an independent nation set up by a mixture of deserters from both the Children of Light and the Brotherhood of Shadow. Disagreeing strongly with the politics of the eternal war, these people left Alcherys and Meraxor to set up a nation where everybody would be treated equal, regardless of their background, race or family history.

There are no characters from this faction in A Chronicle of Chaos, but stay tuned because they will be featured in an upcoming novel in the series! 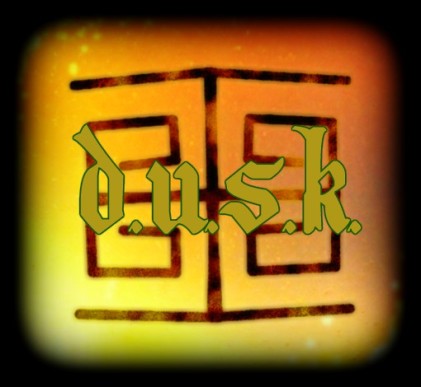 A Chronicle of Chaos is now available from Amazon!

One thought on “The Light and Shadow Chronicles symbol no. 7 – D.U.S.K.”