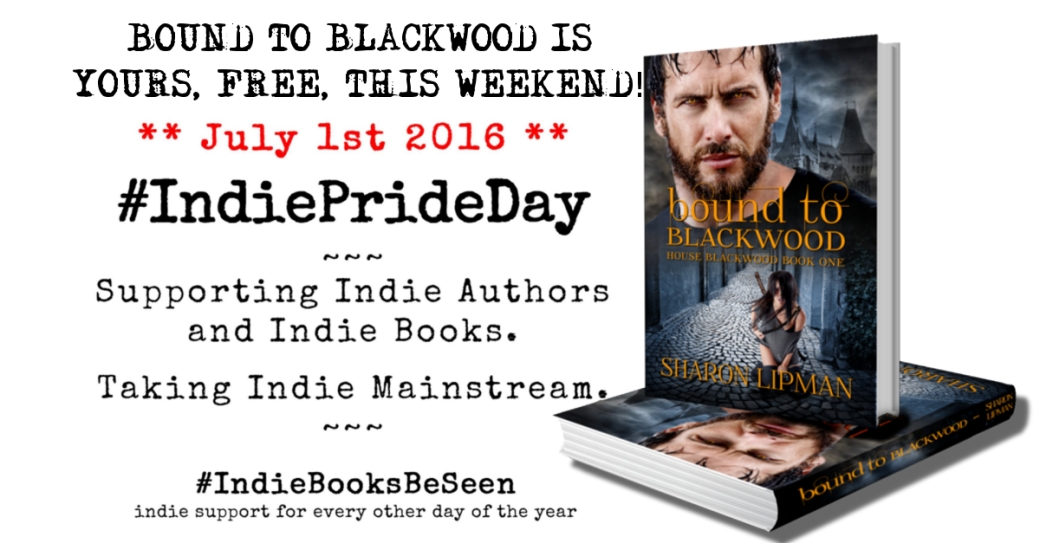 July 1st 2016 marked #IndiePrideDay, a day when the Indie Authors of the world united to offer a real alternative for readers and lovers of books by offering special discounts on their books. There is a huge Indie Author community out there and they’re determined to take indie books mainstream. What does this mean for you? Well author, Sharon Lipman is offering her paranormal romance novel, Bound to Blackwood for free this weekend! Yes, that’s right, a great book, totally free. A proud indie author herself, she’ll be supporting the movement on July 1st, and you can too. Download your copy of Bound to Blackwood now and follow the #IndiePrideDay trend on twitter for some more amazing indie books and discover some new-to-you authors. You won’t regret it!

Would you surrender your soul for the love of the King?

Lena, a vampire and a Guardian of the Order, has been honour-bound to protect human souls all her life. Acting first and thinking second is what’s saved her skin time and again in the war against the Fallen, but her disregard for orders soon catches up with her when her boss is seriously injured. Forced to take responsibility for her actions, Lena is thrust into the path of her very own kryptonite; Thorn. The raw power of his soul calls to her and his mere presence lights a fire within her that she cannot contain.

With Vampire magic waning and the race in crisis, can either of them afford to ignore Nature’s call? If they do, the future of the race is in jeopardy. If they don’t, they will both lose the most precious part of themselves. Their souls.

A huge fan of the paranormal romance genre, Sharon Lipman started writing in her teens. It wasn’t until she was in her thirties that she found a story she was desperate to share. House Blackwood was born and Bound to Blackwood is her debut novel.
She was born in west London and grew up in leafy Surrey in south-east England. A lover of all things British, except the weather, she now lives in Almeria, southern Spain with her husband and an ever growing collection of dogs.

Thorn stepped out from the shadow of the Huguenot Protestant Church in Soho Square. The stench of Fallen hung heavy in the air, making the bile rise in his throat. But what made him nauseous was the delicate scent of Lena’s blood that rode the air with that of the Fallen.

Flashing across the small park, he found her.

His first thought was to go to her, but as he rushed towards her, he realised she wasn’t alone. Lena cradled the human to her as the air around them hummed and crackled. Thorn’s jaw went slack as the realisation of what he was seeing hit him.

The faint green glow of the human’s soul shifted and shimmered as Lena’s power forced it back, moulding it, shaping it. Binding it. The pale green shone more brightly as Lena worked, the air becoming more dense as the spring greens turned into a deep emerald.

Lena’s raven hair whipped across her face and her eyes glowed a vibrant sea-green as she forced the woman’s soul back to her body. A great roar echoed around the park, and for a moment, the air stood still before a blinding light made Thorn shield his eyes. And then it was gone.

Lena released her vice-like grip on the woman and fell backwards. Thorn caught her before her head could hit the ground. She was ghostly pale as Thorn cradled her against his chest, her breathing shallow. The exertion of holding the human soul showed in the sheen of sweat across her brow, and Thorn winced at the bruising on her cheek bone.

“For the love of all that is holy, Lena! What the hell were you thinking?”

Lena’s black eyes fluttered open and stared up at him in disgust. Even injured, with her powers severely depleted, Lena’s contempt for him was tangible. “No one should hold dominion over another’s soul,” she spat back at him.

Thorn closed his eyes. So she knew. In that moment, he realised he’d convinced himself that she hadn’t really seen through him that night in her bedroom. That she’d just rejected him because she didn’t want him, even told himself that it would all be fine. The look on Lena’s face told him otherwise.

As if on cue, the delicious scent of her blood became overwhelming. Thorn gritted his teeth as exotic spices assaulted him. It was almost overpowering.

“You need to get away from me.”