This month my new novel in the Light and Shadow Chronicles – The Shield of Soren – will be released. 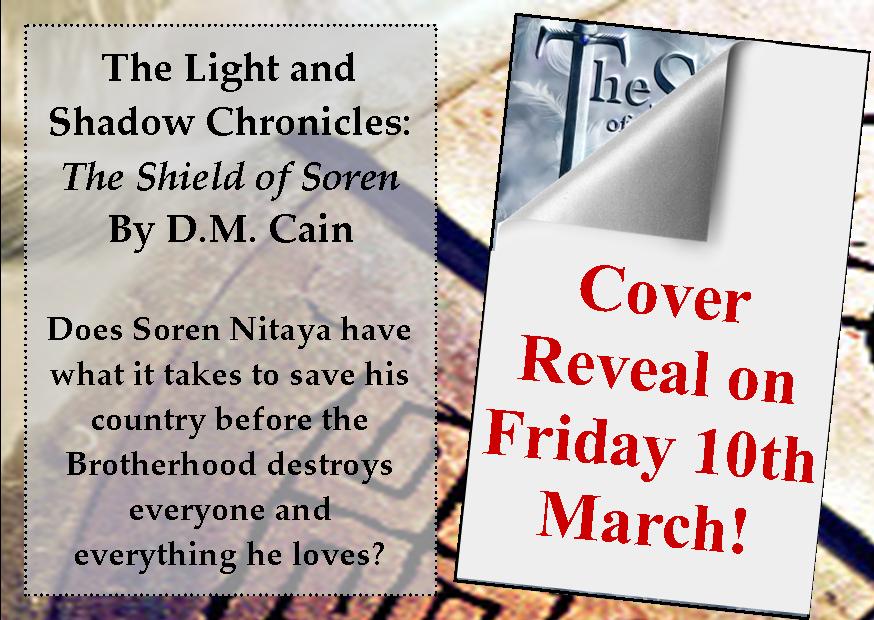 I am excited to reveal the first excerpt from the book:

With a loud clang of metal slamming into metal, the final bolt was undone. Reign slowly pulled the door open, and Vincent found his breath catching in his throat.

High-pitched whimpering came from the tiny bundle of rags cowering at the back of the cage. Her long silver hair parted for a moment and Vincent could see her wide, silver eyes, terrified and innocent. Vincent’s skin prickled with discomfort. He hoped that Reign had a damned good reason for capturing a small child like this.

Beside the glass cage were two oil lamps, both resting unlit. Reign reached up and took one down. Then, in a single savage moment, he slammed the lamp onto the floor of her cage. The girl screamed in terror and covered her head with her hands, but he hadn’t been aiming for her.

The shattered glass gave way to a stream of oil that spread out in a pool across the floor. This seemed to scare the girl even more, and she began to cry quietly, sobbing into her clenched hands.

Reign looked back at Vincent. Excitement flashed in his eyes as he drew a match from a box in his pocket. A small flare of light, a flicker of sulphur and a small flame danced on top of the match. With another laugh, Reign tossed the match into the glass cage.

Vincent gasped as the oil ignited in a rush of intense heat. The entire floor of the cage burst into flames. Vincent tried to rush forwards to save the girl from a fiery death, but the heat was too intense. A hand tapped incessantly at his shoulder, and he tried to brush it away, but Reign grabbed hold of his hand.

When his eyes fell upon the cage, Vincent froze to the spot, his eyes nearly popping from their sockets. “But…how?”

The girl, who Vincent had assumed would be burning in agony, was somehow floating above the flames, hovering at the top of her cage. From her back sprouted two enormous wings of the purest white feathers Vincent had ever seen. The two beautiful white fans could only just fit within the confines of the cage, and as she beat them to stay afloat they fanned the flames beneath her.

It wasn’t just her wings that dazzled Vincent with their purity. Her whole body had adopted an ethereal, almost ghostly, silver aura, her hair shimmering with radiance. She didn’t seem too frightened any more, but there was a definite hint of sadness in her gentle eyes.

Vincent studied her carefully, struggling to catch his breath, which he hadn’t realised he had been holding. “What is she?” he managed to croak.

Reign grinned and draped an arm across Vincent’s shoulder. “She, my friend, is an angel.”

Stay tuned for the cover reveal on Friday 10th March.

In the meantime, why not pick up a copy of the first in the series?