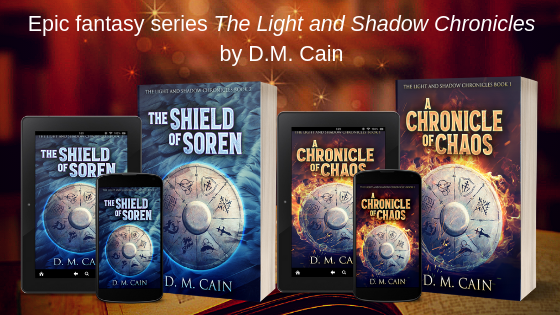 My epic fantasy series ‘The Light and Shadow Chronicles’ has undergone a makeover!

A Chronicle of Chaos was first published by Creativia in June 2016. The amazingly talented Irina French designed the original cover. It features an ancient shield carved with symbols of importance to the history and lore of Alcherys and Meraxor (the warring nations in the series.)

Now, Creativia Publising has designed brand new covers, but still utilising the work of the original artist. Here are the two covers side by side:

A Chronicle of Chaos

In a world ravaged by war, the paths of two warriors are about to cross with world-shattering consequences.

Chaos is a soldier of The Children of the Light, and fights in the name of destiny, honor and glory. Arrogant and headstrong, he believes he is the strongest warrior in the land, until a fateful coincidence puts him at the mercy of the demon Anathema.

The two strike up an intense rivalry, but their obsession to destroy one another only leads them closer together. When the forces of light and dark collide, where will their loyalties lie?

The Shield of Soren is the second book in the epic fantasy series (although you can read them in any order). Released by Creativia in March 2017, this book has also had a makeover:

The Shield of Soren

Ten-year-old Soren Nitaya’s marked talent makes him the youngest soldier ever to become an apprentice to the legendary warrior, Raven Lennox. As a prince of Alcherys, he will be expected to fight in the eternal war against the Brotherhood of Shadow when he reaches sixteen.

But is the young prince up to the task when he’s more interested in causing mischief than in mastering weapons?

When one of Soren’s adventures goes off course, he unwittingly unleashes a deadly threat. It appears that an age-old prophecy is finally coming to pass, and Soren and his family must take a perilous journey deep into their enemy’s land. Does Soren have what it takes to save his country before the Brotherhood destroys everyone and everything he loves?

Buy A Chronicle of Chaos on Amazon

Buy The Shield of Soren on Amazon

The Light and Shadow Chronicles novella: Genesis of Light

A Chronicle of Chaos soundtrack

I've started working through this planning workbook to get ready for my upcoming project. Its great! Cant recommend it enough #amwriting #writerlife #writingtips #amplottingmynextwip #wip https://www.well-storied.com/the-prewrite-project
It's cover reveal day! I present to you my upcoming fantasy novella, Origin of Shadow, out in a few weeks. Cover illustration by @IrinaFrenchArt #amwritingfantasy #NextChapterPub #CoverReveal #books #fantasybooks #fantasy #amwriting #amwritingfiction #immersivefantasy #immersivefantasyfiction #fantasy #fantasybooks #books #bookstagram #booksofinstagram #authorsofinstagram #fantasyauthor #ukauthor #leicestershire #leicesterauthor
Calling on my team for help! Would you like to get your hands on a free copy of Origin of Shadow before it even hits the stores? I am offering five copies ahead of release date completely free! If you are interested, please click on the link below and you will be taken to a Google sign up form which will only take a few moments of your time. I am also looking for bloggers or social media users who might be able to assist with getting the word out once the book releases. This could be via blog spots, interviews, promotional materials or even just posting a few words on Facebook, Twitter, Instagram etc (Please use the same link if you are able to help. Thank you!)
The official line of merchandise for A Chronicle of Chaos has now been released! T-Shirts, hoodies, tote bags and more available now https://teespring.com/a-chronicle-of-chaos #amwriting #bookmerchandise #fantasy #immersivefantasyfiction #TheLightandShadowChronicles #ASMSG #nextchapterpub #authorsofinstagram #writersofinstagram #bookstagram #books #fantasyauthorsofinstagram #fantasyauthor #merchandise #merchandising #hoodies #tshirts #sweater #totebag #socks
Not much time for sitting down with a book? Why not let somebody else read to you while you drive, cook dinner, or walk the dog? I am delighted to announce that my epic fantasy novella, Genesis of Light, is now available as an audiobook! It can be purchased via Audible, Amazon and iTunes. Audiobook US: https://www.audible.com/pd/B07X2T1JLZ/?source_code=AUDFPWS0223189MWT-BK-ACX0-162457&ref=acx_bty_BK_ACX0_162457_rh_us Audiobook UK: https://www.audible.co.uk/pd/B07X1T9RP5/?source_code=AUKFrDlWS02231890H6-BK-ACX0-162457&ref=acx_bty_BK_ACX0_162457_rh_uk #amazon #audiobook #Audible #audiblebook #leicestershireauthor #ukauthor #nextchapterpub #authors #amwriting #amwritingfantasy #immersivefantasyfiction #thelightandshadowchronicles #authorsofinstagram #writersofinstagram #novel #novelist #fantasy #fantasyauthor #fantasyauthorsofinstagram #epicfantasy
My first ever #starfinder session! Completely embracing my #geek side with @alexthomasfilm1 and friends