It doesn’t matter who you think you are… falling in love with the wrong kind can have dire consequences.

They say love conquers all, but in the paranormal worlds of these 12 USA Today and International Bestselling Authors, falling in love means playing with fire….

Someone’s about to get burned.

Dig into hours of forbidden love, lust, and heat as these heroes and heroines long for their beloveds, break taboos, and fight for the one they should never have chosen. This boxed set is bursting at the seams with romance grounded in all things magical—from dragons and sexy shapeshifters to angels, warlocks, and uninhibited masters. There is something to strike everyone’s fancy.

Click the BUY NOW button to dive straight into the Playing with Fire boxed set, with thousands of sizzling pages of sexy, forbidden love and the trials these paramours must overcome to fulfill their deepest desires.

5 Ways to Worldbuild Without the Infodump

Genesis of Light is being released tomorrow, July 31st!

Want a reminder of what young adult fantasy novella Genesis of Light is about? here is the blurb:

Wondering what the Light and Shadow Chronicles series is about?

The world in the Light and Shadow Chronicles is in a state of eternal conflict between two nations – The Children of Light and Brotherhood of Shadow. They have been at war for thousands of years, in a stalemate that is manipulated by forces greater than any of them realise. Both armies try to shift the scales in their favour by recruiting greater forces – angels, demons, dragons, armies of the underworld, and magical beings. The war continues to grow in scale until the entire world is dragged into the conflict and it can only end in a cataclysmic Armageddon.

Each of the stories in the series focuses on a significant character or group and their role within the battle. Every story is laying the foundations for something else, like building blocks for the epic finale. The books are written out of order – one story may feature a character in his adulthood, the next is set before he is born, the next after his death. Putting the order of events together is up to you.

This means that you may choose your own journey through the saga. If you feel connected to a certain character, you can follow that individual’s story first. And if you join the series after book 5 is released, there is no need to read books one through four first!

So where does the new book fit into the series?

The Light and Shadow Chronicles – a unique immersive fantasy world

The Shield of Soren

A Chronicle of Chaos

Cover Reveal for Genesis of Light by D.M. Cain

I’m so excited to share with you the cover for my upcoming release, Genesis of Light! This novella is part of my epic, immersive fantasy series The Light and Shadow Chronicles. The series is centered upon a centuries-long war between two armies. Each book focuses upon a character within the timeline. This novella gives the origin story of one of the armies – The Children of Light. A complementary novella entitled Origin of Shadow will be released towards the end of 2018.

There is no official release date for the book yet but I am hoping it will be towards the end of July 2018. In the meantime, if you haven’t read the others in the series yet you can get them here (though reading these first isn’t required to understand Genesis of Light):

A Chronicle of Chaos –  http://mybook.to/ChronicleofChaos

The Shield of Soren – http://mybook.to/ShieldofSoren

Warring countries, fantastical creatures, beings of terrible power and journeys of epic scale. The legendary Book of Alcherys tells wild and unimaginable stories. But they are not mere fairy tales. They are true, every word.

Callista Nienna is strong and independent, but nothing could have prepared her for civilisation being brought to a violent end. Now, she is forced to stay alive in a desolate wilderness with only her closest friend for support.

She has two choices: give up and die with the wilting world around her or seize her destiny and make it to the only sanctuary left unscathed. At the end of her journey, something awaits Callista, something both terrifying and unbelievable.

Everything happened in an instant. The sky tore open with a deafening crack and the ground beneath their feet shuddered. A deep boom and then fireballs were shooting through the air and plummeting down to the city. Callista gasped and jumped to her feet. Even from this distance, she swore she could hear the screams of terrified people as the city was obliterated. Buildings were flattened, reduced to smouldering rubble within seconds. It was as if the gods themselves were hurling rocks from the sky, decimating everywhere and everyone she loved. Tears welled in her eyes, her mouth wide with horror.

Between the crumbling buildings and blazing infernos, Callista caught a glimpse of something impossible and unimaginable. She shook her head but when she looked back again it was still there. An enormous creature of towering height, unlike anything she had ever seen before. Engulfed with dripping lava and leaving wafts of sulphuric smoke in its wake, it skulked through the burning city. It swiped indiscriminately with gigantic burning fists, smashing aside buildings and trees, and crushing the bones of any living thing in its path.

Slowly, as if recognising Callista’s presence, it turned to look at her. Sizzling eyes of such intense evil focused upon her petrified form. It held her gaze for a moment, then turned away. As quickly as it had emerged, it disappeared behind the remaining buildings and out of sight.

D.M. Cain is a dystopian and fantasy author working for Creativia Publishing. The Light and Shadow Chronicles series features a range of books which can be read in any order. The series instalments to date include A Chronicle of Chaos and The Shield of Soren.

The Light and Shadow Chronicles – a unique immersive fantasy world

The Light and Shadow Chronicles

Wondering What The Shield On My Book Covers Means? Find Out!

Today I have a HUGE favour to ask you…

In the next few months I will be releasing a novella in my fantasy series entitled ‘Genesis of Light‘. I really need some help with the release. It could be sharing posts, hosting me on your blog, reading an advanced copy, or just giving me your opinions on the cover.

If you are willing to help a girl out, please visit this link and fill out the form. (It only involves a few tick boxes so it won’t take more than a minute or two). Thank you so much, wonderful people!

To say thank you, here are some freebies!

A run-of-the-mill fantasy story with some interesting ideas

The Teralin Sword was an interesting story with some great plot points. I was particularly gripped by the concept of the mineral Teralin itself. The author developed a really cool concept with the nature of this metal and its ability to be forged into fascinating weapons. I also enjoyed the dark monks and their evil ways – they lent a brutal gravitas to the book and gave the protagonist a believable and sympathetic motive for his part in the story.

END_OF_DOCUMENT_TOKEN_TO_BE_REPLACED 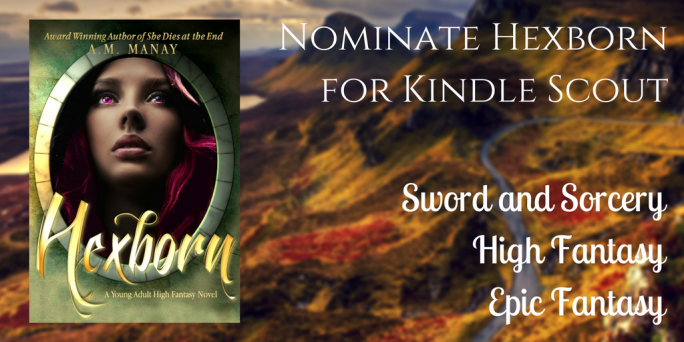 Hexborn and the English Reformation

Inspiration can come from many places.  In the case of Hexborn, my fantasy novel currently up for nominations on Kindle Scout, one of my sources of inspiration was the Reformation. Take a look.

Gasps filled the village Temple as Brother Edmun began reading the king’s declaration regarding his takeover of the Church of Bryn.  He stopped and glared at them over the top of the paper until they quieted, then continued.  Shiloh, sitting on the front bench, could feel eyes upon her back when he got to the section about the cleanliness laws.  Her Da patted her arm and gave her a grin and a wink, and she relaxed.

END_OF_DOCUMENT_TOKEN_TO_BE_REPLACED

My brand new epic fantasy novel The Shield of Soren has just gone live on Amazon!

What an amazing journey the author leads you on! With remarkable characters, a sensational and catchy story line, and a captivating ending, you won’t want the story to end.  Amazon reader

This is a great fast-paced fantasy with very memorable characters. Amazon reader.

My brand new epic fantasy novel The Shield of Soren has just gone live on Amazon!

I've started working through this planning workbook to get ready for my upcoming project. Its great! Cant recommend it enough #amwriting #writerlife #writingtips #amplottingmynextwip #wip https://www.well-storied.com/the-prewrite-project
It's cover reveal day! I present to you my upcoming fantasy novella, Origin of Shadow, out in a few weeks. Cover illustration by @IrinaFrenchArt #amwritingfantasy #NextChapterPub #CoverReveal #books #fantasybooks #fantasy #amwriting #amwritingfiction #immersivefantasy #immersivefantasyfiction #fantasy #fantasybooks #books #bookstagram #booksofinstagram #authorsofinstagram #fantasyauthor #ukauthor #leicestershire #leicesterauthor
Calling on my team for help! Would you like to get your hands on a free copy of Origin of Shadow before it even hits the stores? I am offering five copies ahead of release date completely free! If you are interested, please click on the link below and you will be taken to a Google sign up form which will only take a few moments of your time. I am also looking for bloggers or social media users who might be able to assist with getting the word out once the book releases. This could be via blog spots, interviews, promotional materials or even just posting a few words on Facebook, Twitter, Instagram etc (Please use the same link if you are able to help. Thank you!)
The official line of merchandise for A Chronicle of Chaos has now been released! T-Shirts, hoodies, tote bags and more available now https://teespring.com/a-chronicle-of-chaos #amwriting #bookmerchandise #fantasy #immersivefantasyfiction #TheLightandShadowChronicles #ASMSG #nextchapterpub #authorsofinstagram #writersofinstagram #bookstagram #books #fantasyauthorsofinstagram #fantasyauthor #merchandise #merchandising #hoodies #tshirts #sweater #totebag #socks
Not much time for sitting down with a book? Why not let somebody else read to you while you drive, cook dinner, or walk the dog? I am delighted to announce that my epic fantasy novella, Genesis of Light, is now available as an audiobook! It can be purchased via Audible, Amazon and iTunes. Audiobook US: https://www.audible.com/pd/B07X2T1JLZ/?source_code=AUDFPWS0223189MWT-BK-ACX0-162457&ref=acx_bty_BK_ACX0_162457_rh_us Audiobook UK: https://www.audible.co.uk/pd/B07X1T9RP5/?source_code=AUKFrDlWS02231890H6-BK-ACX0-162457&ref=acx_bty_BK_ACX0_162457_rh_uk #amazon #audiobook #Audible #audiblebook #leicestershireauthor #ukauthor #nextchapterpub #authors #amwriting #amwritingfantasy #immersivefantasyfiction #thelightandshadowchronicles #authorsofinstagram #writersofinstagram #novel #novelist #fantasy #fantasyauthor #fantasyauthorsofinstagram #epicfantasy
My first ever #starfinder session! Completely embracing my #geek side with @alexthomasfilm1 and friends